Currency - All prices are in AUD

Currency - All prices are in AUD 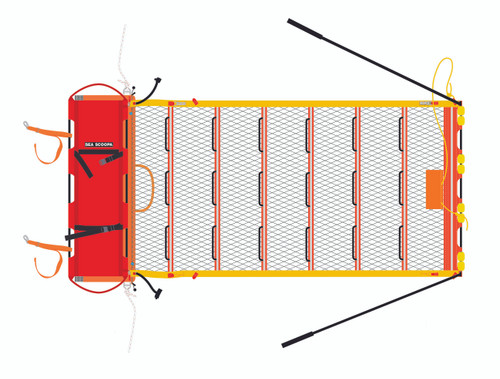 * Ex Demo* The Rescue Boat Sea Scoopa is a vital piece of rescue equipment for all rescue boats. The device scoops and lifts a man overboard onto rescue vessels. Portable, with its own carry bag, the Sea Scoopa is equally effective when used on rigid inflatable boats or powerboats with a higher free board. Simple to use, it only needs two people to perform an entire man overboard rescue. When rescuing a man overboard, rescue organisations can experience problems with their duty of care to the victim and their OH&S obligations to the rescuers. Sea Scoopa addresses these issues. Unlike most other man overboard (MOB) rescue devices, the Sea Scoopa provides a mechanical advantage during the rescue process thus improving lifting techniques and reducing the incidence of back injuries. It is designed for the horizontal retrieval of a man overboard. This is important to avoid the circulatory collapse that can occur if victims are lifted out of the water vertically. The Rescue Boat Sea Scoopa provides advantages over cradle, lifting net or rescue frame styled MOB rescue devices.

Benefits for the Man Overboard

Benefits for the Rescuer

Rescue Boat Sea Scoopa has been NATA tested to a Royal Australian Navy standard and is certified to lift a load of 300 kg. It is used by several organisations including the Australian Navy and Australian Customs

Australian designed and made.

This product hasn't received any reviews yet. Be the first to review this product!